Rev. David is a highly gifted, anointed, dynamic and charismatic Servant of the most High God. He’s a revivalist that carries a strong revival anointing fire that’s rapidly spreading across borders throughout North and South America in fulfillment of God’s prophetic word.
Facebook-f Twitter Instagram

Rev. David ministers in the fullness of the power of God, through him, captives are
set free, delivered, healed and destinies are unlocked.

Rev. David has trained over 500 pastors and leaders, planted over 26 churches across the world which includes several mega churches. He currently holds board positions at many reputable ministries and businesses and also affiliated with four ministerial governing bodies.

Rev. David Philemon was converted and saved by the Lord Jesus Christ in August of 1995, after a terrible gang fight. In the week of his salvation, he had an encounter with the Lord that lasted for over 4 hours and received a clear vision and a mandate from the Lord which lead to the path of  life that included being mentored and trained by Bishop David Oyedepo of Living Faith Church Worldwide where he served as a full-time Pastor for 7 years with a huge success pastoring a mega church and building several churches.

Following the instructions of God, he received the blessing of his spiritual father, Bishop David O. Oyedepo and resigned from Living Faith Church Worldwide. Rev. David established an independent itinerant ministry and traveled around the world preaching the word of God with major miracles, signs and wonders.

Rev. David received instruction from God in 2005 to establish the headquarters of his ministry in Chicago, IL. He officially started the church on October 1 2006 with less than 5 people but the congregation increased tremendously now with over 3000 registered members.

Rev. David has a lifetime goal of sponsoring thousands of churches for other pastors and missionaries across the world for the expansion and establishment of the kingdom of Christ on earth.

Two of his favorite quotes are, “I WAS BORN TO DISGRACE THE KINGDOM OF DARKNESS.” and

“DO NOT RETIRE; ONLY REFIRE, UNTIL YOU ACQUIRE WHAT YOU DESIRE.”

Since Rev. David’s salvation encounter with the Lord in 1995, he has been on fire for God, serving Him fervently and has not looked back. He vows to live for Jesus and do His will forever till he takes his last breath here on earth (if Jesus tarries). His greatest desire is to hear on the last day, his Lord and Savior Jesus Christ tell him, “This is My son, whom I am very pleased with, come into my rest.”.  And he believes by God’s grace and power, it will be so in Jesus name!

The Month Of Divine Majesty

Dr. Pastor Paul Enenche is a trained Medical Doctor, called of God into full time ministry, with a heavy Apostolic and Prophetic mantle for the restoration of human lives and dignities. His ministrations are characterized by deep undiluted insights from the Word of God, accurate Word of Knowledge and the demonstration of the power of God in Supernatural healings, miracles, signs and wonders. His ministry is geared towards causing our generation to:
• Experience God’s Person and Presence in our lives
• Realize our true purpose for existence,
• Comprehend our full potential in life,
• Discover God’s life-changing and life-lifting principles,
• Connect with God’s power to overcome the negative forces of life and above all, to
• End our journey with God in eternity in Heaven and to escape the torments of hell.

He is the Senior Pastor of Dunamis International Gospel Centre, with the headquarters situated at the Lord’s Garden, along the airport road, Abuja, NIGERIA. They currently a mega service every Wednesday evening and Sunday morning, among other services. His passion is to see that the earth be filled with the knowledge of the glory of the Lord as the waters cover the sea. As a result, his ministry is involved in aggressive spread of the Gospel via every possible media— the Commission’s Television Station— Dunamis TV, their 24/7 Web-TV and Web-Radio broadcast as well as campus revival meetings, crusades and aggressive church plantings.

He is married to Dr Becky, a beautiful, intelligent, submissive, supportive and hardworking Medical Doctor, also called of God into full time ministry. And together, they have four blessed children.

She oversees the administrative arm of the ministry and a constant companion to the husband in his many ministry assignments within Nigeria and abroad. Together with her husband they have four children.

She runs a Monthly meeting called Marital Success Strategies For Enriching Sisters (MASSES), where she addresses the many challenges that women face because in her words, the state of their welfare determines the state of their spirituality. The meeting, therefore, is geared at raising women that will succeed in their relationships with human beings, their husbands / fiances, which will enhance a solid relationship with God that will ensure eternity in Heaven.

Apostle Felix Okoh is the Senior Pastor of House of Treasures Ministries which started on the 11th of September 2011, as a small gathering in a resort and spa hotel and today, the ministry boasts a membership of 2500.

He is an icon, a reformer, a vibrant and radical preacher of the Word God who has dedicated his life to ministry. His apostolic and teaching ministry started in the 90s after his graduation from university. 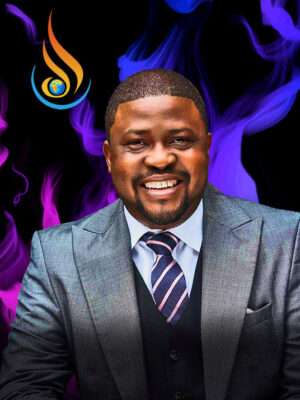 Pastor Akinyemi Davids is the founding pastor of Global impact church, one of the fastest growing churches in Africa; which currently runs 3 great services every Sunday in its facility headquartered at The Goodland, Ifako, Lagos; a non-denominational church focused on pragmatic human transformation.

He is the president of Global Impact Institute (GII), an institute aimed at SKILL acquisition and human capacity development. He also oversees the human potential fund (HPF), an NGO dedicated to helping young individuals effectively finance their education and/or entrepreneurial pathways.

A sought after speaker and the host of Achieve Greatness today on TV, he is a graduate of Obafemi Awolowo University with leadership & entrepreneurial certifications from the pan Atlantic university, Nigeria, Institute of leadership & management, United Kingdom, Daystar Leadership Academy (DLA), Nigeria, and an executive MBA (SEMP) from university of Huddersfield) London.
He is the author of the Achieve Greatness Daily Devotional and several books including “The Blessing of Overflow”, “Seven Laws of Favour”, “In Pursuit of Academic Excellence “etc. He has passion for leadership and hosts regularly the Ministers and Leaders Forum (MLF) that attracts leaders from various spheres of life all over the country. Pastor Yemi has a strong desire to see people fulfil their potential.

Pastor Yemi Davids is married to Abimbola Davids with their four adorable daughters.

George Izunwa is the Lead Pastor of Gateway International Church, with headquarters in Port Harcourt, Rivers State, Nigeria. He is called, anointed and commissioned by God to “go teach My people strength”.

Stay updated on
latest sermons from
Church on Fire International